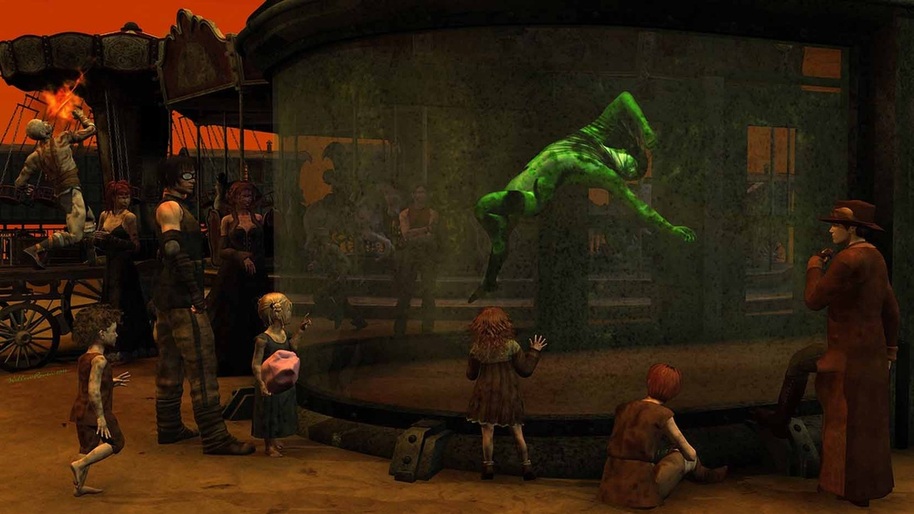 The piece above is my third for Scape Magazine. This one is inspired by AshleyRose Sullivan's Fish Bowl, scheduled to be featured in the upcoming issue. Below is an excerpt of what you'll see in Scape's third release (UPDATE: here is the link to the issue featuring Fish Bowl: http://scapezine.com/2012/issue-3/fish-bowl/)

... Dust swirled around that world. Around all the world he knew. But inside his tank, his fingertips pressed against the glass, he could not fathom it.
Little girls and boys, stared up at him, at his blue tinted water, at his gills. They were covered in it. Covered in the dust that had spread like a quiet infestation. Their lungs were full of it. Their skin was caked with it, red and brown, where his was slick and fish-scale green.
Mortimer spun in the tank, large enough for he and one other, then did a somersault through the water. He swam like a fish, which is what he happened to be—an impossible primate with webbed digits and gills. A young man who filtered air from water when everyone around him breathed red dust. He was born like a dolphin, into the water, and never left.
A crowd formed around his tank and peered through clear wall and water to his body, his face, his hair and spindly fingers. He swam suddenly, toward the glass and allowed the crowd to see his second set of eyelids, his suction cup tipped fingers and they gasped then laughed as he did a backward flip, and swam to the bottom. A little girl tapped on the glass. It was so near to inaudible that Mortimer would've missed it completely if he hadn't turned in time to see her.
Fine grains of dirt covered her pigtails and a faint rusty layer clung to her pink cotton candy but, Mortimer figured, she probably wouldn't even notice.
A plume of fire shot into the sky as Johnny, all tattoos and sweating skin, exhaled into the night and the crowd moved on....

I'll update the site when the third issue of Scape Magazine goes live (yes, you'll have to read the rest of the story then ... ;D).